Conflict is inevitable. If you have any sort of relationship, whether as a parent or peer, leader or volunteer, you’re bound to have conflict from time to time. Conflict seems to me to have such a negative connotation, but the more I’ve wrestled with conflict in general, and in relationship to other people, the more I wonder how it got to be like that. What I’m discovering is that it’s how we handle it that makes it either a negative experience, or a positive one.

Unresolved conflict is unhealthy conflict that builds walls and creates division that ultimately breaks down relationships. Conflict addressed in a healthy manner, experienced in the way God intended, can restore relationships.

I’m learning not to fear conflict, but to embrace it as an opportunity to build relationships instead of walls and build bridges instead of burning them.

Here’s what I know. I’ve got a long way to go, but I don’t go it alone. My heavenly Father not only walks with me, He also modeled this in a profound way that I’d never considered before. Consider the following example: The conflict – sin on our part that separates us from our perfect heavenly Father. The solution – great personal sacrifice on God’s part through the crucifixion of His Son in order to bring restoration and reconciliation, even as we were sinning against Him. When I look at my own conflict with others through that lens it changes things a little bit. Actually, it changes it a lot. I’m learning to ask God daily to help me to sacrifice my “rights” for His righteousness, particularly when facing conflict.

At the Orange Conference this year, I attended a breakout on “How to Have Difficult Conversations” by Jeanne Stevens that surprised me. It helped me look at conflict and how we navigate it in a way that asked questions in order to seek resolution in a way that honored not only the people involved, but also the God we serve. Jeanne’s breakout also helped me identify what conflict is and why we encounter it so much.

Conflict at its core is a disagreement (not everyone experiences life like I do) or a difference (not everyone thinks like I do) that poses a threat (triggers something that causes us to feel threatened).

Sometimes we are on the receiving end of that equation, and sometimes we are creating it. She opened our time by saying, “Every person in the room is 1.) a leader, who 2.) makes decisions. You have people who like your decisions, and those who don’t. The result, conflict.”

You can spot a conflict by discerning the difference between curious questions and judgmental questioning.

“Spiritual leadership is almost always dealing with someone’s past pain, parents, or past religious experience.”

In order to get to the root of the problem or the “thing behind the thing” and truly minister to people (rather than defaulting to avoiding, accommodating or competing with them) we need to ask more questions. Engage a judgmental question by responding with a curious one. For example,

Judgmental Question: “Why are we changing <insert your decision here>? We’ve always done ‘it’ this way. This isn’t going to work. I don’t understand…”

Curious Response: “Tell me more about what you’re thinking. Is there something we could do to make this transition easier? What are your thoughts on ways to <insert one of the reasons you made the decision you did, like eliminating distractions or increasing value>?”

We don’t always want to give our time and attention to only those who seem to be the most judgmental or appear to be the most confrontational about decisions, but by asking even a few curious questions, we may be able to get to the “thing behind the thing” that builds a bridge and models healthy conflict resolution.

Jeanne ended her time by reminding us,

“Good leadership isn’t the absence of conflict, it’s the presence of restoration and reconciliation in relationships. Love. Lead. Love.”

I walked out of Jeanne’s breakout feeling encouraged by the idea that conflict doesn’t have to be feared, and difficult conversations shouldn’t be avoided, but that they provide incredible opportunities to practice walking in grace and mercy, modeled by our Heavenly Father, who went to great lengths in order that we be reconciled to Him, and to one another. Now go and Love. Lead. Love. 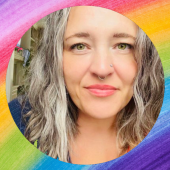 Random video that makes me happy