App of the week: Pandora 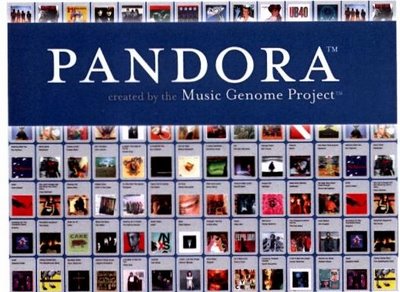 One app in particular, I’ve been enjoying immensely. It’s Pandora. The good news is that you don’t have to be an iPhone user to enjoy Pandora. It works on many phones as well as being a great desktop/laptop app. In addition, many new TV’s, Blu-Ray players and other media devices are coming with the Pandora app pre-installed. I love this app and I think it’s going to change the way our kids listen to music.

I first heard about Pandora almost four years ago when it just launched. A lot of people like Pandora, without really knowing why it works or any of the mechanisms behind it… which I think is beyond fascinating. Several years before Pandora Launched, a bigger project got underway which was called the Music Genome Project. Essentially, all music was broken down into simpler components. These components were classified into the building blocks that make up the music we listen to. Music researchers listened to song after song after song, categorizing what elements and components made up that song. A database was created to keep up with all this information. The idea is that most of us like certain kinds of music. We usually like the music becasue we like certain elements. Maybe we like music with strong acoustic guitar or music with techno base lines. If there was a database that kept track of these elements, then it could recommend songs that we didn’t know about based on the elements we like. That’s Pandora.

So, with Pandora, you create a “station” by recommending an artist or song. Pandora serves up a song. If you like the song, you click on the “like” button and Pandora learns that you like the elements in that song. If it presents a song that you don’t like, then Pandora determines what elements that song has that the song you liked didn’t. It learns with every “like” or “dislike” you make and creates a stations that plays the perfect playlist. How amazing is that?

So, I’m not a huge music guy and I never know what’s popular or not. Pandora’s perfect for that. I list a song I know I like and I “discover” all kinds of new music. One thing they fixed from before is that it can distinguish from certain genres. When Pandora first came out, I was really big into Chris Tomlin and Jeremy Camp. I liked that worship rock genre. However, there’s a lot a non-worship rock music that sounds just like them. Pandora couldn’t tell the difference from what was worship or not. Now it seems to do a great job with that.

So, if you haven’t discovered, check out Pandora today. It’s free, unless you listen to way too much, but then it’s only a buck or two to listen to more.

The old music system hates Pandora because it represents the death of terrestrial radio. I say bring it. As long as you have a data-enabled phone and a method to connect your phone to your stereo, you never have to search for bad radio stations again. If it hasn’t happened already, cars will likely offer options like connecting to your favorite Pandora station. It won’t be long before kids ask us about the good old days when we’d scan through dozens of radio stations to find music to listen to.

Have you published your blog at Amazon yet?