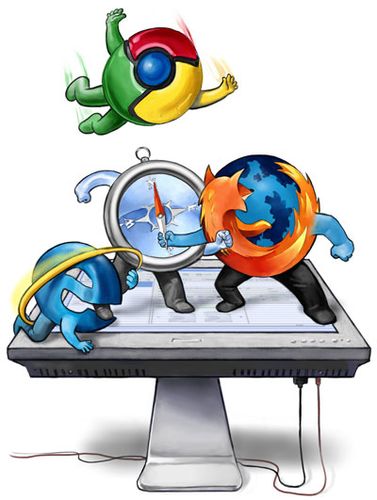 Yesterday I announced that Google Chrome was my app of the week, mostly becasue of the extensions capability. I’ve been using Firefox for the last several years and have been very excited to move to Chrome. However, I realized that most people generally use Internet Explorer if they have a PC. If they have a Mac, then there’s a good chance they’re using Safari. What browser you use is totally a personal choice, but I think that most of these people use these browsers simple becasue it’s what was on their computer when they got it and they’re just happy with it. The problem is that most of these people don’t know that there could possibly be a much better experience right around the corner. This blog post is simply to reveal some options you didn’t know you were missing.

So, here’s the basic rundown of the big four browsers.

Internet Explorer: Seriously, are you really using this? It’s slow and often riddled with security issues. Do yourself a favor and download any other browser. You’ll be glad you did. Internet Explorer is the oldest browser of the big four. It also has the largest market share, but that certainly isn’t an indicator of how good it is. In actuality, their market share has been decreasing to the other three big browsers simply because they’re better. IE has not been innovative in many years. It can do some of the “extra things” the other browsers can do, but mainly becasue it has adapted and copied over the years to remain relevant.

Safari: It’s a genuinely positive browsing experience. The basic, entry level Mac user tends to use Safari and be happy with it as a web browser and it really is good. It’s probably the dominant Mac browser simply becasue it comes with the Mac and new Mac owners don’t know any better. When you compare Firefox to Safari, Firefox usually wins when it comes to features and usability. Safari does include plugins which create extra functionality, but the number is limited mainly becasue of Apple’s iron grip on all Apple products which lessen development from outsiders.

Firefox: For many years now, Firefox has been the open browser that people came to when they got tired of a poor browsing experience or being told how they should browse the internet. The stigma for quite some time was that if a person really wasn’t very computer savvy, they used Safari or Internet Explorer, but once they moved beyond what was handed to them, they moved to Firefox. Firefox is very customizable from aesthetics to functionality. Thousands of developers are constantly creating new plugins to allow you do to all kinds of cool stuff. Personally, I moved to Firefox about 3 years ago and my experience has been amazing. The plugins make all the difference in the world. As a result, my browser experience is always changing and getting better.

Chrome: I don’t know that anyone saw Chrome coming when they jumped in the browser war a little over a year ago. Chrome was designed to push browsers to the next level. Changes were made to the way Chrome operates as a browser to make it faster. We all want a faster experience and Chrome has taken big steps to make that happen. Another really cool thing Chrome did was to make each tab it’s own individual process. That means when the page your surfing fails and locks up, it doesn’t lock up your entire browser. Just close out of that tab and you’ll see all your other tabs work just fine. Like anything new, the layout is a little different and it may take some getting used to, but the experience is better. Like I posted yesterday, Chrome just added extension functionality so you can customize your browsing experience. However, what Chrome did differently is to separate the extension processes from the browsing processes so your speed experience isn’t minimized as a result of extensions. Firefox users have always known that when more plugins are installed, the slower the browser ran. Not true of Chrome.

So, that’s an overview of the current browser war. Yes, it was my opinion. It’s based on my experience of using all four browsers. So what do I use? Well, since I’m a Mac, I don’t even have access to Internet Explorer anymore. I use Safari about once a week and it’s usually just as a backup. Sometimes I come to a web page that doesn’t display correctly, so I’ll open Safari just to see what it looks like there. That’s really the only reason I use Safari. Primarily though, I’m still a Firefox user; however, Chrome may have just swooped into the lead with all the extensions. Chrome for the Mac is still technically Beta and I’ve occasionally encountered it’s bugginess. Until the glitch I run in to while editing blog posts on WordPress is fixed, I’ll probably still use Firefox primary. After that, I see a switch in the works.

I may use a Mac, but I didn’t drink the Kool Aid

When God works in spite of you