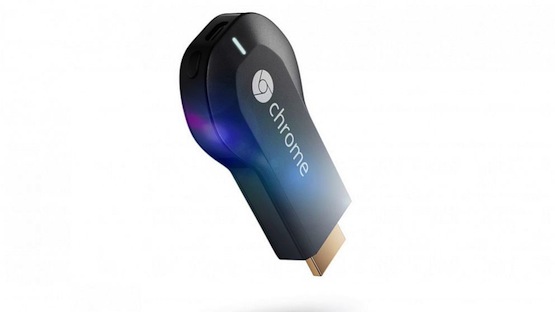 It’s been a crazy busy month, I totally missed the Chromecast announcement. Earlier this month, Google announced a new product called Chromecast. It’s less than revolutionary, but there are several compelling reasons to keep your eye… or even purchase this little device.

Let’s be clear though, the Chromcast is no Apple TV. In it’s current state, it will not replace your Apple TV. However, you might want one of these things for other reasons. Let’s take a look at what it does.

Chromecast is a little device that plugs into the HDMI port of your TV (be sure your TV has HDMI). The device is powered either by plugging into an open USB port or you can plug into an outlet. The device connects to the internet and allows just about any of your devices and computers to connect to broadcast to it. The primary function though seems to be that you can broadcast whatever is on your chrome browser on your computers or devices or youtube videos. I don’t know how it works, but it’s also for watching Netflix as Netflix offered three months of free service when you bought the chromecast.

Here’s the deal. Apple TV does all of this and more. With Apple TV, you can airplay form your computers and devices anything you can see on your screens. You can also watch movies from netflix, hulu, itunes and other content providers directly through the apple TV. However, it is $100 and most people aren’t going to cary their Apple TV with them wherever they go (although it is fairly small).

The Chromecast is far more limited, but here are the reasons why I did just order it. It’s $35. It’s very mobile. I can broadcast anything I can see on my Chrome browser, which means I can watch Amazon Prime videos, Hulu, Netflix and listen to Spotify. From a work standpoint, I can project google calendars, documents and and anything else I can view in my chrome browsers… which is 90% of why I’d use this in the office. There have been many times I’ve taken my team to an offsite meeting where we had access to a LCD TV, but using it was frustrating because we had to bring all our wires, connectors, the audio cables were too short and everything else. Chromecast might be a better option for this… as long as there was accessible internet. If your projector had HDMI inputs, you could use Chromecast to present as well.

I also like that this is just the first entry into TV broadcasting from Google. I love my Apple TV, but it’s been out for almost a decade. This beta device has a ways to go, but I’m excited what might be down the chute.

They are backed up on orders, mine should ship in 2-3 weeks. You can get these at BestBuy, Google Play and Amazon… but since I get free two day shipping with Amazon Prime, I got mine here.

Expect an update in a few weeks after I’ve been able to use, for both work and fun!

Check out the video below: