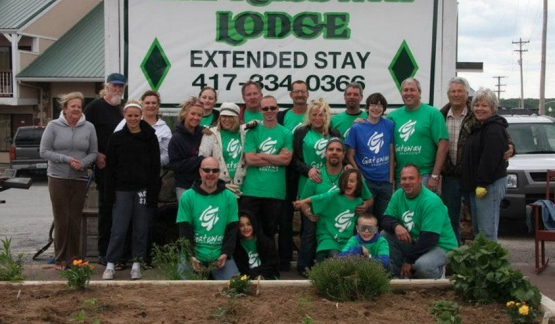 Last week I helped lead a serving trip for High School students to Branson, MO. I know, people keep asking, “Branson, Missouri? On a mission trip?” Yes, it’s not what you would expect, but yes. Let me tell you more about what is happening in Branson, it’s really cool.

So, about three or four years ago, Brian and Amy Stallings, who have lived in Branson for over a decade became aware of the poor and homeless situation in Branson and felt called by God to do something. They started an organization called “Jesus was Homeless” and began feeding those in need. It just started with 30-40 people and has grown significantly. More on that in a second.

You might have gone to Branson before as a family. It’s a very unusual place… like a Christian version or family-friendly version of Las Vegas. There is a main strip upon which there are shows after shows. From Country Music Jamborees to Magic Shows, it would take you weeks to see them all. There are Go-Cart tracks, a pretty good amusement park and fantastic outdoor fun on Table Rock Lake. It’s a great destination for families. However, what you’ll not see when you visit is the poverty… and it’s pretty pervasive. It’s just hidden very well. Right off of the main strip are all the old hotels. The one tourists stayed in 30-40 years ago. Now they’re run-down and falling apart. Who stays in these? Well, that’s the problem. The working poor live there. They pay week to week because there is no affordable housing in Branson close to where all the jobs are and without public transportation, the people who clean room, sell tickets and do all the other things that make Branson run need to live right near the jobs. Entire families of 4-6 people often live in 40 year old hotel rooms for years. These people barely have enough money to get by if at all. If they lose their job, they’ll be homeless, which many are from time to time. These people are stuck. They can’t really get out, but they can’t advance either.

Jesus was Homeless now feeds about 800 people living in these hotels and they’re only getting started. They’re hoping to expand soon and feel 500-600 more. For a city with a population of 10,000, that’s a pretty significant segment in poverty.

About a year ago, Brian and Amy Stallings read John Burke’s book, “No Perfect People Allowed.” They began watching the services over the web and quickly began showing the services to both the people they served as well as the people who were helping them. Over the last 12 months, they’ve become “Gateway Branson” and we’ve been finding ways to help them. So, last week we took a team of 35 from our High School ministry to go serve in Branson. It was an incredible trip and we’re very proud to partner with an incredible ministry like Gateway Branson. On Sunday, the students led worship (the first time they ever had live worship) to a crowd of 100 people who made up Gateway Branson. We all sat together and watched the live stream of Gateway Austin and it was an incredible experience. There isn’t a church like Gateway Branson in Branson. Here’s what I loved most. Of the 100 people in the room, at least half, maybe more, were homeless or the working poor. Some churches try to reach out to the homeless and take them on as a project. Gateway Branson is building their church with them. Really cool. More on this later this week.