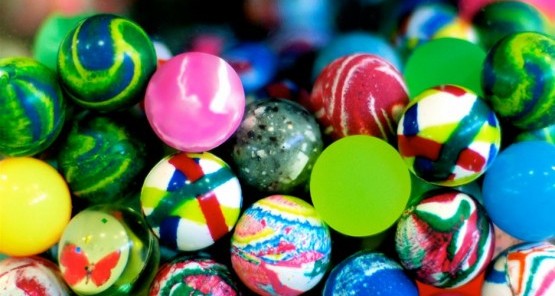 A few weeks ago, our internet campus pastor spoke to the High School students. He was talking about Peter and how he was a man who took some great risks. It was a pretty simple message, but there was an illustration that really resonated with me concerning a fear of taking risks.

He talked about how his son (when he was young) had a great bouncy ball. He would lean over the upstairs railing and bounce his ball from floor to ceiling trying to get as much bounce as he could. Later that day, the two of them went to pick up his sister from school. The young boy got out of the car where there was this great huge paved area. With a wide open sky and a huge pad of hard spaces to bounce, this may have been the perfect environment to “bounce.” However, the boy cautiously bounced the ball no higher than his waist, carefully making sure not to loose the ball. Sure, this space would be perfect for letting it fly, but if the ball hit a crack or some other object, it could ricochet off in another direction and be lost. As he told that story, I saw myself in exactly that same way. I probably still wouldn’t let it fly, because I wouldn’t want to lose the bouncy ball. At graduation, I only threw my cap up a few inches… because I didn’t want to lose it. Caution. Fear. Protection.

Vince passed out bouncy balls to most of the students and encouraged them to let them fly. He said, “I want to walk though the church courtyard later this week and find some of these bouncy balls under a bush or in a crack under the stairs, which is evidence that someone let it fly with little concern of holding on to it.”

Since that talk, I’ve been thinking about where I’ve played it safe. I’ve been contemplating where I could  be less controlling and simply let it fly. What bout you? Where have you not taken a rsik