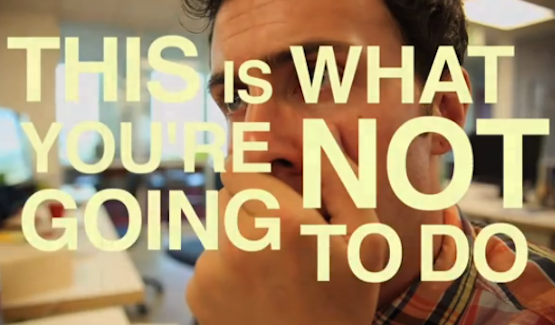 A couple of days ago I came across the following video. With over 3 million views, you may or may not have seen it, but you’ll love it.

This is a funny video, but it PERFECTLY illustrates a key principle of the book Switch, a book all about change. The concept is “If you want people to change, you must provide crystal clear direction.”

The illustration used in switch is how two college professors tried to encourage a change in public health in a West Virginia city. Getting healthy is about a vague as you can imagine. Everyone has their own opinions of what getting healthy looks like or consists of. The two professors decided to attack local unhealthiness through milk. Most American’s drink milk… usually 2%. Milk also happens to be the largest source of saturated fat in most American’s diets. Helping people switch from 2% to skim milk would have a huge impact on the general health of a community. They realized that helping the city to get healthier through their choice of milk was a purchasing decision, so they designed an entire campaign for TV, Radio and Newspaper around why people should purchase skim milk. People will drink whatever they have in the fridge, so you have to convince them as they buy. Before the campaign, the market share for low-fat milk was about 18 percent. The campaign increased marketshare to over 40 percent and six months later, it stayed at 35 percent. These two professors made a pretty measurable impact on the health of a community by providing crystal clear direction… buy low-fat milk.

The video above touches on the principles of change presented in Switch. Save the environment! Everyone gets excited about it, but how one person can systematically make a difference can be confusing. There are so many ways one can try to make a difference and most of the time, we don’t stick to a solution because the solution is complicated or vague. That’s why “follow the frog” works.

So, how does this apply to ministry?

We want parents to be better parents, right? Every parent wants to be a better parent. If a parent stopped and asked you, “how do I become a better parent?” what would your answer be? More than likely, it wouldn’t be crystal clear. It might be vague or complicated. Perhaps our churches could use a campaign that suggests a simple and crystal clear direction. Maybe it’s as simple as pray as a family every day. That’s it. Maybe that one thing alone can do more to impact the most families in your church.

We want kids to grow spiritually, right? Spiritual growth is kind of complicated in some ways. What do you measure? Is there a way you can give crystal clear direction that points toward spiritual growth. I’m almost certain there is.

What other ways can you direct change through simple and crystal clear direction?