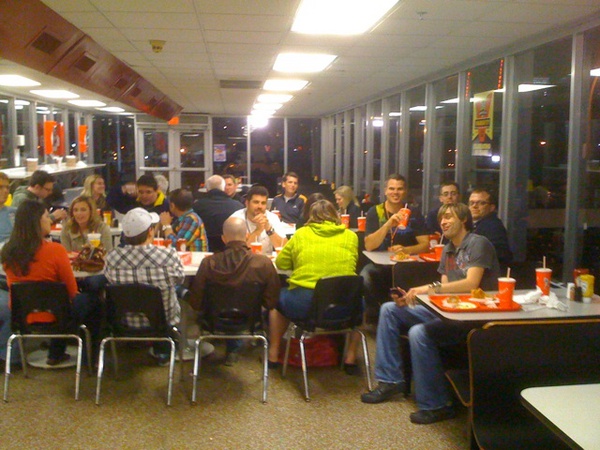 Wow, how much fun! Last night’s casual meet up at the Varsity turned into quite the shindig. Over 30 Orange-minded leaders came out to gobble down some Varsity famous onion rings and and Orange shakes. It was a blast. We joked around, had fun and learned from each other.

In the two hours I was there (the Varsity finally kicked us out at 11:00 PM), I sat and talked family ministry/parenting ministry philosophy & staffing structure with Michale Chanley (as well as some cool new ideas he’s got for the future). He’s in a position that doesn’t exist in 99% of all other churches and there’s really a lot we can learn from what he’s doing. I caught up with what’s going on in my friend Jonathan Cliff’s life (his church is going through a huge capital campaign where out of it he’s getting a new, state of the art kids building). Anytime I get to sit and hang out with Jonathan is time well spent. Except, if you get up to go to the bathroom or order food, don’t leave your phone, he’ll tweet nice things about himself from your phone while you’re gone. I only got a few minutes to talk to Jim Wideman (I’ll get more time with him at dinner tonight), but I did get to play with his iPad for a few minutes. He’s as big an Apple fan as Reggie, he’s owned every Apple laptop that’s ever come out. I also got to hang out with Amy Fenton Lee for a few minutes (who I just met via email last week). She just launched the Inclusive Church blog a few weeks ago, a HUGE resource on Special Needs ministry. This blog’s going to be huge!

In addition to all that, I shook some hands, chatted a little and had a great time meeting some new ministry friends. It was so easy and so much fun. It’s got me really excited about the “official” Tweet Up tonight. It’s going to be so much fun as I expect many more people being that everyone going to Orange will have arrived. It’s at 10:00 at the Chocolate Perks. Click here for more details. Also, don’t forget to come visit us in the Orange Leader’s Lounge, it’s the 2nd floor of the Arena. Grab some coffee (it’s free) and hang out for a little while. I look forward to meeting you!

I was a visitor, the first time in over 10 years