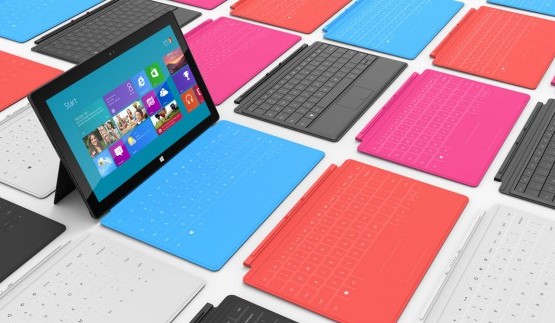 The Microsoft Surface (the new one), is Microsoft’s entry into the tablet market. Innovative and compelling? Hmmmm, not really.

It’s a widescreen format tablet with a pretty cool detachable keyboard cover and a built in kickstand which makes this thing feel more like a laptop when you want a laptop. It seems to have the touch and feel of a tablet, but it comes built in with a “Windows desktop” where you can run MS Office, access documents, network drives and such.

Sure, there are a handful of pros about this device, but here’s why I feel like the Surface is an epic fail.

The original surface that was introduced five years ago was something that had never been done before. Using RFID technology and such, it turned an entire tabletop into a multi-touch screen. It looked innovative and pushing the boundaries of what is next. The recently released surface? Total opposite. It’s like Microsoft is introducing a product for those who aren’t ready to go to a tablet and need something in-between a tablet and a laptop. There are so many features about this device that caused me to shout at the computer (I was watching video reviews) “Just buy a laptop!!!” Even the inclusion of a Windows desktop sealed the deal for me. Yes, it’s comfortable and familiar, but this isn’t propelling us toward the future and toward what is next, but hanging on to the past.

Sorry Microsoft. I’ve been hearing over the past few months how Microsoft is positioning itself to be the innovator they where a couple of decades ago, but Surface isn’t evidence of of innovation.