About a year ago I wrote this post about my Mac Mini media center. I’m changing my tune… kind of. After a year of watching Hulu and Netflix from my Mac Mini, I’d say it wasn’t worth the money. Are you shocked?

I opted to spend less money by picking up a used Mac Mini, but I’ve found that the only thing I’m using the Mac Mini for is watching Hulu. We can watch Netflix on the Wii and honestly, it’s significantly easier. With the Mini, I have to pull out the keyboard and the mouse and when my wife is trying to get a video on for herself or the boy, her default is just to use the Wii. So, I decided to sell the Mini and pick up a web enabled blu ray player that would allow me to watch netflix, hulu, pandora and more all from one device. I could get the Blu Ray Player for 1/3 the cost of a Mac Mini.

Ultimately, I just wasn’t using the Mini enough to justify the expense. I’d rather have the extra $200-$300 for something else.

However, now my gripe. In order to watch Hulu on devices other than a computer browser you need to have Hulu Plus, as $8 a month subscription. I went ahead and signed up for the free week trial. Here’s what I got. 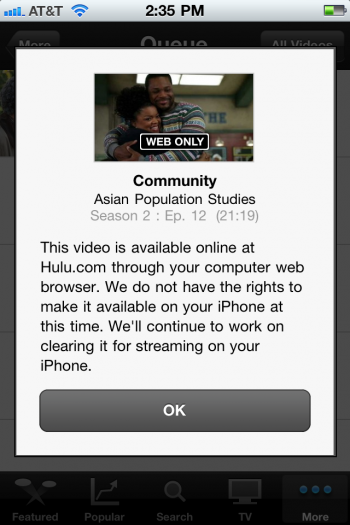 I was not happy. Two of the shows I was planning to watch yesterday, Hulu doesn’t have the rights to show on devices. I totally din’t expect this at all. I’m not sure this is Hulu’s fault, but the archaic laws surrounding video content that haven’t caught up to the 21st century. It will get better, but now I’m evaluating whether I really want Hulu Plus. I’m open to spending a little money to have access to my shows (I don’t like it though), but I don’t totally get what I’m paying for? I’m still watching commercials and several of the shows I want to watch, I can’t watch from devices like my iPad or Blu Ray player. Fail Hulu! Fail! Don’t charge for something you can’t deliver yet.

So, just an update on my Mac Mini Media Center that is no more and my gripes against Hulu.