Take a peak at the next generation 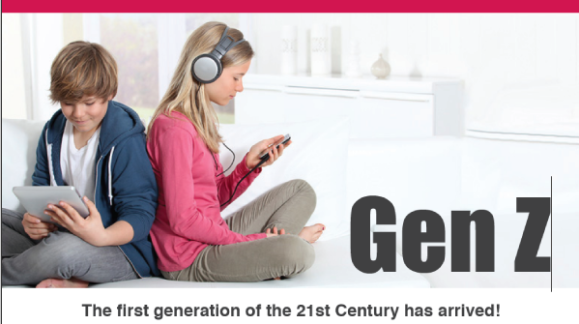 Perhaps you’ve seen the article about Generation Z circulating around the web the last week or so. If you work with kids/teenagers, you really should read this article now as it has implications for you ministry for the next 15-20 years, seriously.

Reading this article encouraged me and actually gave me a great deal of hope for the future. It also challenged thinking that I’ve often had about the current Generation Y (millennials). So many people (including myself) often put the subsequent generation in a box based on our own generation’s worldview. We find ourselves saying things like “they’re over-connected” or “they’re narcissistic.” We’ll say, “when I was their age, I spent all day on my bike exploring my neighborhood instead of being glued to a screen.” We even mock their TV, movies, music and other media.

As much as we like to compare and it’s practically impossible to put ourselves in their shoes. They grew up in a different world than we did. There were influences beyond their control that shaped them differently than we were shaped. Just embrace the fact that they are different, realize that you just wont get it and try to appreciate that.

This new generation, Generation Z is fascinating – completely different from Generation Y. Here are some of the findings of Generation Z:

This generation is a highly motivated group when compared to Generation Y.

Here’s a compelling quote about this generation:

Gen Z are bellwethers, says McCrindle: “Where Gen Z goes, our world goes.” What that portends is seismic social disruption and the commensurate anxiety. “This is the first time in history kids know more than adults about something really important to society—maybe the most important thing,” says Tapscott.

This Generation (currently those 18 or younger) may give both Generation Y and X a run for their money. They’re probably not going to put up with the mess we’ve left them. However, they are more than likely going to be motivated to fix many of the things that are broken about the world they were born into.

Generation Z is currently in the preschool, elementary environments and student ministry programs in our churches. Never before (in the age of modern ministry) has there been such an opportunity to have an impact. This generation is more wired to volunteer and make a social impact than any other. We’ve always made room for students and kids to volunteer (probably because we needed them), but we need to create space for as many to volunteer as possible  because of what volunteering in our ministries does for their faith. Our motivation shouldn’t just be to build the volunteer team, but as an opportunity to connect faith to what matters so much for a generation.

Lastly, we need to appeal to this generation’s intellect. This is a smart bunch of kids. They’re not going to believe something just because you said so or because they’re supposed to. We can’t patronize their intelligence, but allow them to explore their faith, ask difficult questions and wrestle with the complexity to develop a true and authentic faith.

Speaking from an iPad