The Bible App for Kids 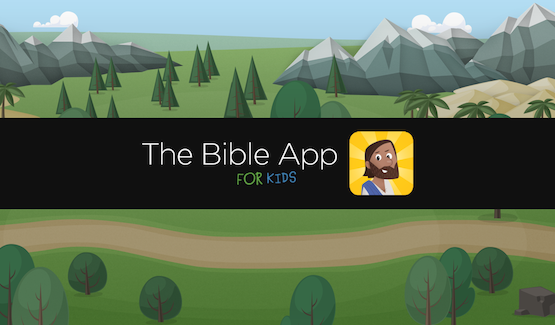 Yesterday I was lucky enough to get my hands on the brand new Bible App for Kids from the makers of YouVersion, the Bible App just about everyone has on their phone. What a treat! The App is released into the wild on Thursday, but I thought I’d give everyone a sneak peak into this new app aimed for our kids.

I’ll start with this. I didn’t have any expectations going into this. I learned that this app was coming out a few weeks ago, but let me tell you, I’ve been pretty busy. I’ve not done any research or looked into what this app would be like. So, as I downloaded a copy of the app, I did so with no specific hopes or expectations for what this app would or would not be like. Honestly, I opened this app pretty much like most parents probably will.

Upon opening the app, I was impressed. My initial response was, “there’s no way a church designed this app.” The immediate feeling I got was that this had Disney or Rovio (makers of Angry Birds) quality. From the graphics, soundtrack and the ease of navigation, this was an app that kids will dig into right away and they’ll figure out what they need to do right away.

The app will be immediately familiar to kids as it is set up more like a game. What look like worlds to explore are actual Bible stories. Each story can be downloaded and experienced. The stories have a soundtrack with narration in which both can be turned on or off. Each “page” of a story can be explored. The graphics are live and interactive meaning that when you click on different characters or items, they often do things… most of which will generate giggles from your kids. Within the story are items to find that add to your “armor of God” inventory. Lastly, there are simple questions and one question quizzes built into the story that give you stars and points helping the user to “complete” a story.

Currently there are 7 or 8 stories to explore with new ones adding each month. Like any good children’s Bible, it won’t take long of a child to devour the entire thing. The built in achievements will motivate most kids to read through it multiple times and keep them coming back month after month when new stories are released.

When it comes to a Bible app for kids, I can’t imagine an app done any better. Well done. I’m sure there will be some critics as it’s not just like YouVersion. It’s not the entire bible word for word with reading plans. The reality here is that some kids will spend 30-45 minutes exploring every aspect of the app and when done, they’ll move back to Angry Birds or Where’s my Water. Some people might complain, saying that if the app was better, it would be designed in such a way that they’d use it every day and prefer it over all the other apps on your phone or tablet, but I just don’t think that’s very fair. I love my bible app, but I definatley spend more time on Kindle or Hulu than I do YouVersion, but that isn’t the fault of the Bible app.

A big “well” done to the people at LifeChurch.tv who made this app a reality. I imagine that millions and millions of kids around the world will be impacted because of this app. 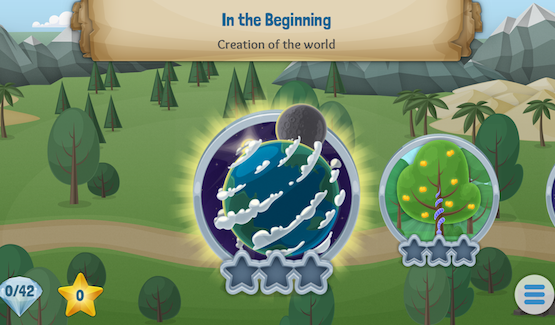 Game-like interface to each of the Bible stories. 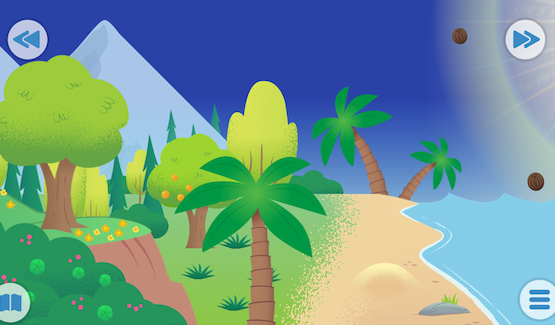 Highly interactive story pages. Click on the coconut trees and they launch coconuts into the sea. 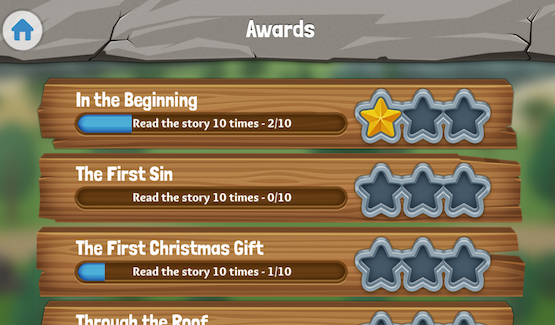 Earn awards and tracks progress within the app as you read the stories multiple times. 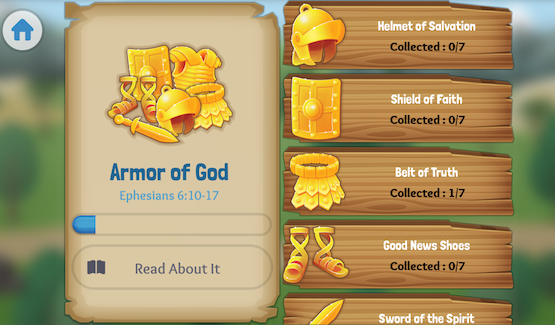 Find items hidden in the various stories and build to your Armor of God collection.

What do you call your check-in area?