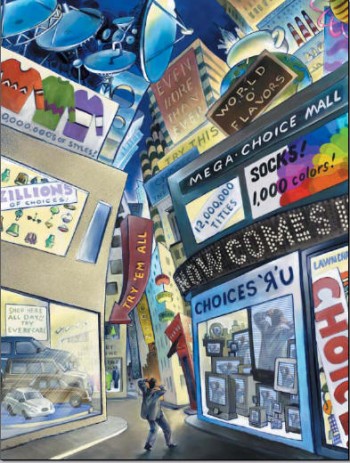 As much as we love to have the freedom of choice, sometimes it can be our very downfall. I’ve worked with kids long enough that you never ask a group of kids, “what do you want to do?” or “what movie do you want to watch?” Chaos, disappointment and tears always follow such questions. Instead, I ask, “Hey, do you guys want to go to the park or to the pool?” or “Do you want to watch this movie or that movie?”

Studies show that options also have a significant effect on persuasion. Interestingly, the more choices you offer, the less effective you’re going to be in persuading someone to pick something. An intriguing study was done to illustrate how extensive choices can be demotivating. In this study, an upscale store had 24 varieties of jam and anyone who tasted the jam got a voucher to get jam at a discount. Three percent of the tasters purchased jam. However, in another experiment, the store offered 6 flavors for tasting. In this case, 30% o the tasters bought jam. Excessive choice can be demotivating.

I whole-heartedly believe in this principle. I absolutely hate going to the Cheesecake Factory. Their 40 page menu is so frustrating. Obviously, they’ve seen success, but the excessive choice does have a negative affect on me.

In ministry, we naturally have tried to limit choices. In times of recruiting, we used to have a ministry selection card where we had various roles that could be selected for Early Childhood, Elementary, Middle School and High School. Each department had 5-8 different roles. So, someone interested in serving “kids” had to choose between 20-30 different roles. Too much. So, we’ve consolidated. We eventually narrowed it down to where we only really have 3-5 roles available in Next Gen. So, someone only needs to pick which of those 3-5 roles they’d like to do and then what age group they’d want to serve in. It’s so much easier to explain and so much easier to get someone ob board.