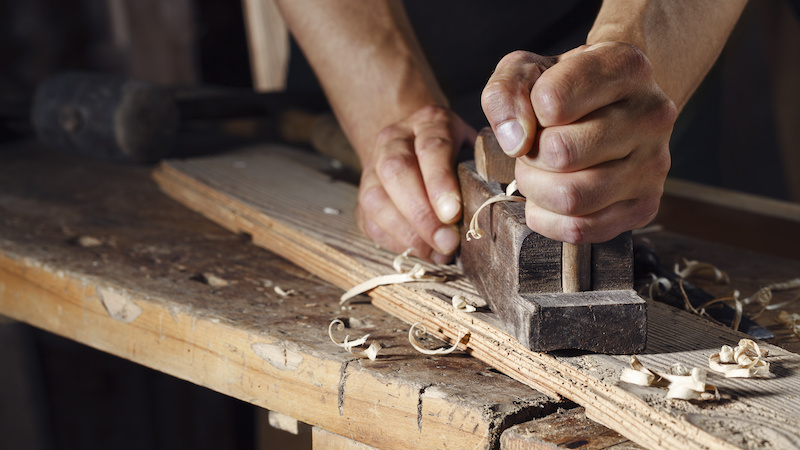 Heresy, right? Seriously, I’m not trying to crush everything you’ve come to know and love about the Bible. First I tell you that Joseph and Mary weren’t turned away from an “inn” and then I tell you that Jesus wasn’t born in a stable. Now I’m going to tell you that he wasn’t a carpenter.

These are the kinds of truths/facts that you wouldn’t come across unless you were really looking for it, or unless you read the 5th Gospel. Who knew that a trip to the Holy Land would reveal so much about what 1st century was really like. Okay, let’s get back to this whole Jesus not being a carpenter thing.

When we think of Jesus and his earthly father, we think of Joseph passing down his trade to his son. Typically this began when a boy was 10-12 years old. Jesus didn’t begin his ministry until the age of 30, so he would have spent 15-20 years working in his father’s craft. When we imagine these moments, what do we picture:

We’ve all imagined something. Unfortunately, we’ve probably imagined the wrong thing. Why? Because we’re westerners and when we think of carpenters, we think of men and women who work with wood. Also, the translation for the word carpenter was a little off.

In Matthew 13:55, Jesus was teaching in the synagog of his hometown. The crowd asks,

“Isn’t this the carpenter’s son? Isn’t his mother’s name Mary, and aren’t his brothers James, Joseph, Simon and Judas?

This is where we learned Jesus’ (and Joseph’s) profession. However, the word “carpenter” comes from the Greek word tekton. This word is more accurately translated as “craftsman” or “builder.” If you go and visit Israel today, you’ll notice something interesting. Most houses and buildings are built from stone. In the 1st century, most homes and buildings were also built from stone. There just weren’t (and still aren’t) many trees in this part of the world. The trees that do exist are small and scrubby like you’d find in an arid environment. It was far more likely that Joseph and his son were builders and stone masons.

The Hebraic scholar James Fleming explained, “Jesus and Joseph would have formed and made nine out of ten projects from stone either by chiseling or carving the stone or stacking building blocks.”

Further evidence of this is the kind of work that was happening at this time in history. Nazareth was only a few miles from the town of Sepphoris. Herod Antipas was developing Sepphoris into what would be called “the jewel of all Galilee.” This building project would have required a massive number of stone masons. Between Nazareth and Sepphoris was a massive rock quarry. Although we don’t know for sure, the evidence says that Jesus and his father likely worked in the quarry and the town of Sepphoris.

If Jesus was a stone mason, think about some of the things he said and the things said about him:

Luke 20:17-18 Jesus looked directly at them and asked, “Then what is the meaning of that which is written: “‘The stone the builders rejected has become the cornerstone’? Everyone who falls on that stone will be broken to pieces; anyone on whom it falls will be crushed.”

Why wouldn’t Jesus speak in terms of stones and cornerstones if this had been his craft for over a decade?

Acts 4:11-12 Jesus is “‘the stone you builders rejected, which has become the cornerstone.’

The disciples had heard Jesus speak for years, it’s likely they picked up his words and examples.

1 Peter 2:5 you also, like living stones, are being built into a spiritual house to be a holy priesthood, offering spiritual sacrifices acceptable to God through Jesus Christ.

What was said was deeply connected to the cultural and historical context. A carpenter in this time and location was almost certainly a stone mason. This new knowledge shouldn’t shake your faith, but it brightens the details a little, doesn’t it? Doesn’t it help you feel like you know him a little better? I know that I feel that way.

Do you know of any great Bible Songs?

Evan Doyle is working for me this summer!