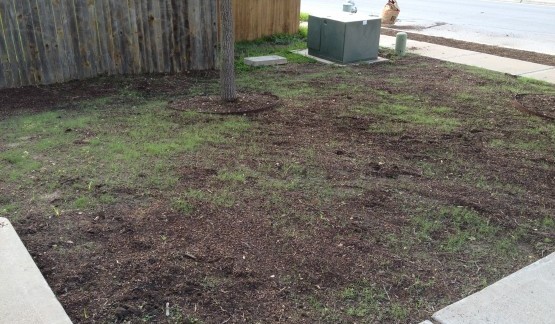 So I live in Central Texas where last summer, it hardly rained and I think it was over 100 degrees for 300+ day’s straight. That may be an exaggeration, but my yard wasn’t happy. Actually, about midway through the summer, I got a notice from our Home Owners Association that the grass in my front yard needed to be repaired. We were given an extension with no definite expiration because there was no way to repair the grass without significant wanter and since were were under heavy drought, that action wouldn’t be prudent.

Sara, my smart and beautiful bride, and I started doing some research. She was ready to go with the full on “Arizona style” zero-scape, but I wasn’t quite ready to be that neighbor. I started looking into the other kinds of grasses we could use. I kept telling Titus that we were getting rid of the “Florida” grass (St. Augustine) and looking for some good “Texas” grass, which made him happy. I learned that Buffalo Praire Grass was allowed by our HOA and it looked like a good option. It’s actual native to this area of Texas and incredibly drought resistant. Because I have some shade (not much) in my yard, I actually found the perfect solution, a grass mix  called Habi-turf. It is a mix of Buffalo Grass, Blue Grama, and Curley Mesquite. Sounds like a grass from Texas, huh? It’s both drought resistant and does well in some shade. Woo hoo! Here’s the vision my friends. One the grass is established, I can water it only once every 45 days. Even better, I can mow it just once a month. And guess what? It loves the hot 100+ weather. Sounds like a yard dream come true, huh?

I’m getting somewhere, I promise.

So, in late May, I spent an excruciating 15 hours tilling up my entire front yard and part of the back. I applied a layer of compost and then planted the beautiful “Texas” grass seed. The instructions told me to water every day (even twice if I wanted) to help the seed germinate and have the grass get established for the next ten days. I followed these instructions. I was a little disappointed as I didn’t see a lot of action. Then suddenly, I began to see some little springs of clumpy like grass come up. I was excited, but there really wasn’t much coming up. Only in just a few spots. Two weeks go by and my yard is mostly dirt except for maybe 2 dozen of these clumps of grass. I was pretty discouraged. My busy season of life took over and I abandoned my yard effort. I decided that I would try to figure something out in the fall. In the meantime, weeds were starting to creep back in. Uggh! All that work… and nothing.

I was gone to camp for a week and while I was gone, it rained a lot. Strange for Texas, but we were grateful. When I came home I saw something that made me do a happy dance (really, don’t try to picture that). All across my front yard was a soft and fluffy layer of green peach fuzz. It was the Buffalo Grass in the seed mix that was starting to come in. The rain! Thank God for the Rain. In those first 15 days, I simply had not watered enough for the seeds to germinate, so they simply waited, dormant. 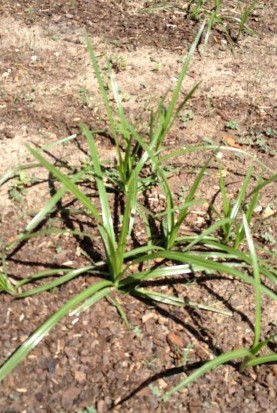 One section of my yard was so overtaken with weeds, I literally just jumped in and started digging everything up again. In that section, I was just going to start over again. I went to the nursery to buy more seed and brought some pictures. They confirmed that I had Buffalo Grass coming in. They aslo confirmed that the first sprigs that I had coming up in the 15 days wasn’t grass, but nut weed. Uggh! I came home and pulled up every weed in my yard and replanted the seed where I tore everything up and over-seeded in some of the other areas where there wasn’t much grass coming up.

For the past three days, I’ve watered the trash out of my yard. This grass is gonna grow baby!

So, here’s what I learned (sorry for such a long introduction).

We need a clear picture of success in order to enjoy success. I really didn’t know what each of the three grasses I panted looked like. I had some pictures on the computer, but that was it. When I saw green come up, I got excited because I assumed that it was grass. All along though, it was just a stupid weed. Because I didn’t have a clear picture of what my grass was supposed to look like, I didn’t know the difference between grass and a weed. If I had had a clear picture of what success would look like (a blanket of green peach fuzz), then I would have known specifically what I was looking for. I wouldn’t have gotten excited about the nut weed. I would have known that the seeds must not have germinated. I could have called the garden center and asked what I was doing wrong and they likely would have told me that I wasn’t watering enough.

I wonder if too much in ministry and other areas of life, we don’t take the time to define success. We don’t get a clear picture of what we expect it to look like. We don’t ask others who have experienced success what it looks and feels like. Instead, we get busy, we do a lot of work and sometimes we celebrate things that aren’t success because maybe they look like success at first, but in the end, its really not what we want… just an imitation of success.

I’ll write more this week. I think it’s worth providing an example or two of what this looks like in direct ministry application.