Jesus Wasn’t Born the Way You Think He Was 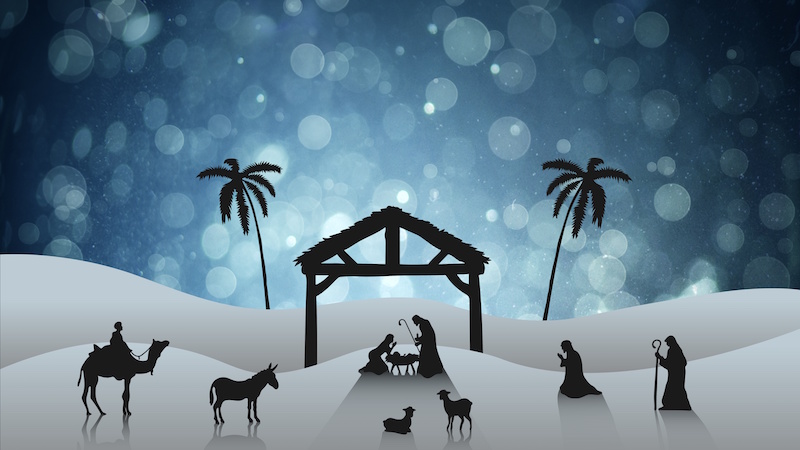 About midway through our trip to Israel, we visited Bethlehem and the Church of the Nativity. We actually stayed in a hotel on Manger Square for three nights, so we had a little more time in this little town than the average tourist. Of all the holy sites we visited in Israel, I think that that the Church of the Nativity was my favorite. First of all, our guide was amazing. Secondly, I learned more about the birth of Jesus from a historical/cultural perspective than I ever knew. I left Bethlehem with a completely different view of the birth of my savior and I feel like I’m better for knowing it. I didn’t learn anything that shook up my faith, but I did learn things that deepened my faith and connected dots that I didn’t know needed connecting.

Let’s start with the story we all know:

Joseph and Mary traveled from Nazareth to Joseph’s home town of Bethlehem because of the census. They arrived at the very full and busy town of Bethlehem and there was no room in the Inn. Fortunately, there was room in the stable which is where Marry had baby Jesus, surrounded by the animals. She wrapped baby Jesus in swaddling cloth and placed him in a manger. Joseph and Mary (and a barn full of animals) treasured what had happened.

Right? Hmmm, not exactly. The story isn’t exactly accurate as we know it. Some of the inaccuracies have to do with the translation process. Other inaccuracies are due to a modern/western disconnect from the historical and cultural perspective. Let’s look at how this really happened.

You may have already known this. I had heard this. I had heard that “Christmas” was moved to December 25th to mirror the date of a pagan holiday. How do we know for sure that Jesus wasn’t born in December? When you combine what the Bible says and the historical and cultural information, you get your answer. December isn’t a lovely time in Israel. Yes, it’s the desert, but it’s quite cold and messy at this time of the year. It was highly unlikely that a census was held in December. Most historians claim that a census would likely happen after the harvest and before the weather got bad. Also, we know in Luke 2 that the shepherds were in the fields tending to their flocks at night when Jesus was born. Generally, shepherds would be out with their flocks from early spring through October. It was too cold in December to be in the fields. Our guide also told us that they wouldn’t be in these particular fields when the crops were growing, so it was likely to be during the Fall when Jesus was born. Many biblical experts can do some math to put Jesus’ birth date in mid-late September. It is highly likely that John the Baptist (Jesus’ cousin) was conceived in June (based on the priestly duties of Zacharias when he was told by the angel that he would have a son). We know that six months later, Mary was visited by the angel Gabriel to be told of her conception. Play the months out and you arrive at a September due date.

Joseph and Mary would never have stayed in an Inn

Bethlehem was the ancestral home of Joseph. It was likely that he had family in Bethlehem. Aunts, uncles, and cousins. Even if he had never met his family, he would only need to share his family lineage with a few people in town to be directed to his family home. The very idea that Joseph wouldn’t have stayed with family is unthinkable. Where we are misled is the word “Inn.” It’s the Greek word “kataluma” This word can be translated to the word Inn as it was in several other stories in the Bible. However, the word “kataluma” can also be translated to “private upper room.” “Kataluma” is the same word used to describe the room where Jesus and the disciples had the last supper. This was typically a private room reserved for guest or entertainment. It was likely that other family members had already arrived and they had already taken all the available space in the “kataluma.”

Jesus wasn’t born in a stable

If there wasn’t room in the “kataluma,” where were Mary and Joseph sent?  Well, they stayed in the lower section of the home with the animals. You have to understand a few things before you form an impression. An ancient Palestinian family in this region would only have two things of value. Gold or sheep. The animals, most likely sheep, would have lived in the home with the family. Most homes were just one room and the family would place the sheep in the lowest and furthest back part of the home. There was often very little separation from the sheep and the family. This is where Mary and Joseph stayed, among the sheep in the back part of the home. When Jesus was born, this little family wasn’t sad and alone off in a stable far from their relatives. No, they were surrounded by family. It was likely a time of great rejoicing, a beautiful celebration with relatives.

The Church of the Nativity was built over this home. There was a holy site built over the cave/grotto in the first century to commemorate the location. It’s possible that the location isn’t exactly accurate, but because it was recognized as a holy site within 100 years of the birth of Christ, it’s very likely that this was the actual location. The cave under the Church of the Nativity fits the description based on Biblical, historical evidence. There was a large upper room for entertaining as well as a lower section where the sheep would have been kept.

This new knowledge didn’t transform my faith, but it did deepen my understanding. I love the idea that Joseph and Mary weren’t alone that night. I love the idea that they were surrounded by family who celebrated with them. As Christmas rolls around this year, how I imagine the moment of his birth will be different from how it was in the past. I’ll remember standing in the cave where he came into this world. What an amazing expereince to be in that place. 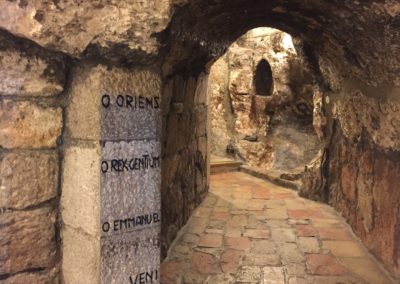 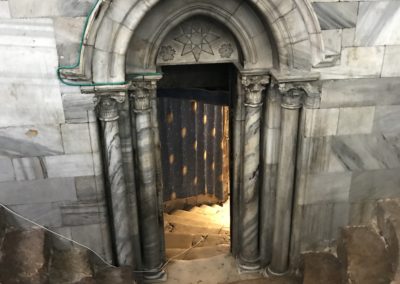 The entry to the cave where Mary and Joseph Stayed 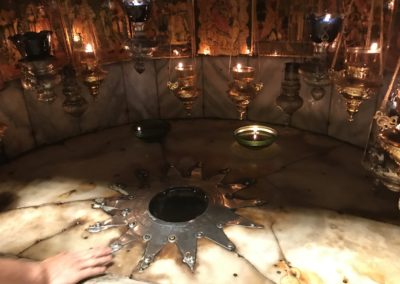 The place where Jesus was thought to be born. 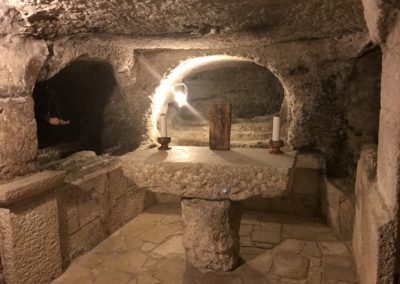 Upper room of the cave where May and Joseph stayed