App of the week: Settlers of Catan on iPhone/iPad 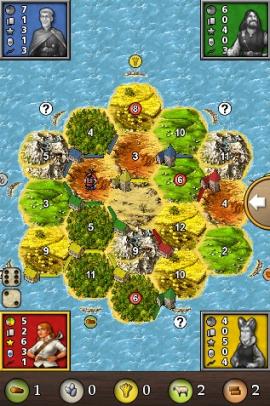 I’m a huge fan of the game, “The Settlers of Catan.” Over a year ago Wired Magazine wrote an article about this game called Monopoly Killer that describes how this game and others like it are redefining the board game genre. I’ve been playing Settlers for 6-8 years and I LOVE it. So, I just found out this week that there is an iPhone app where you can play multi-player or just against the computer. I don’t get to play very often, so this app is great for scratching the itch.

I’ll be honest, it’s a little hard to play on the little screen that is my iPhone. However, I think the experience would be considerably different on the iPad. So, if you have an iPad and you’d like to check out a very unique but fun game, pick up the Catan app. The board game actually costs $40, so you might want to try out the digital version first to make sure you’re going to like it.

Check out more on this iPhone app right here.

Oh, but before I leave you though, I saw another bit of Catan goodness. A version of the game has been developed for the Microsoft Surface. We first learned about the Surface 3 years ago and over the years we’ve seen videos and bits of news about it, but nothing widespread. However, playing Catan on the Surface looks unread. Check it out!

If you feel you need to trust me that this is an awesome game, then buy it right here… the real board game version.

What have I been doing recently?